Do androids dream of people who don't use this quote?

Playing Detroit: Become Human, I’ve seen things you people wouldn’t believe. Androids shooting people in downtown Detroit. I watched detectives track deviants in the dark near a bus stop. All those moments will be told in time, like words in a review. Time to read.

See, that’s a much more obscure misquote. Step up, nerds.

Detroit asks the question that science fiction has been asking for decades: do androids count as people if they’re pretty much people? The answer is probably yes, but you should play anyway. 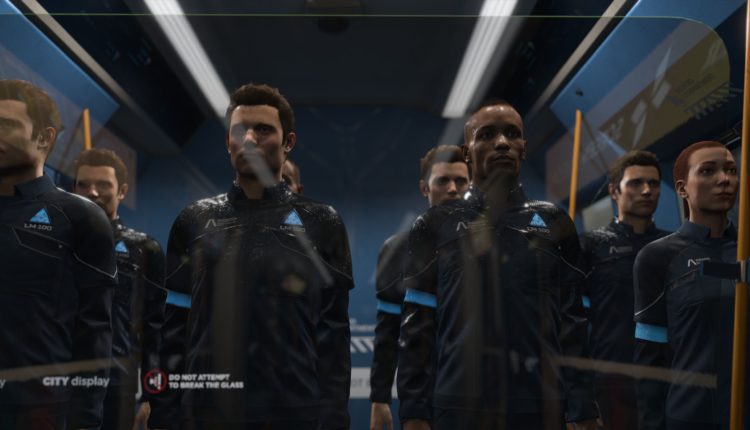 The meat of the game is your standard Quantic Dream fare, where well timed button presses and player choices dictate the story. There are three main threads happening concurrently; Connor, the prototype android detective, is tasked with hunting down ‘deviant’ androids acting beyond their programming; Kara is an android nanny/housekeeper looking after the young, introverted Alice and her drug-addicted father; and Markus, the assistant to an aging artist whose existence takes a sharp turn when family conflict arises. 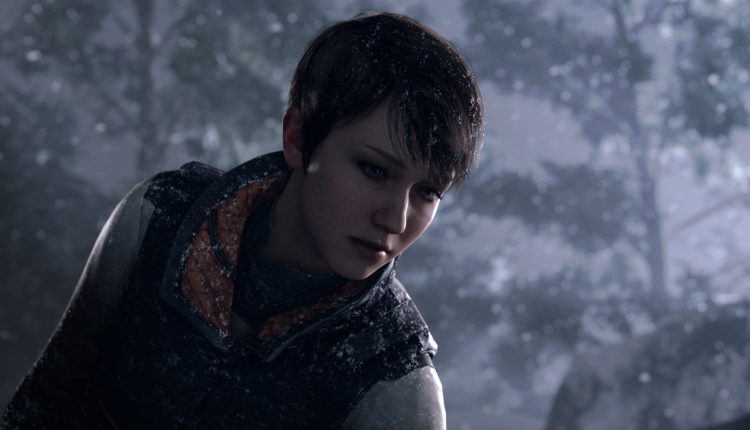 Each character feels unique and personable, whether it’s paranoid android Kara, mecha-messiah Markus, or RoboCop Connor. I liked them. I wanted things to go well for them. Did they? You’ll have to play and see.

It sounds like I’m teasing, but seriously this is a game you want to discover. Chances are you won’t get your perfect happily-ever-after on the first try, but going in blind makes it a surprisingly immersive and interesting experience, especially considering that the subject matter has been so well tread in the past. 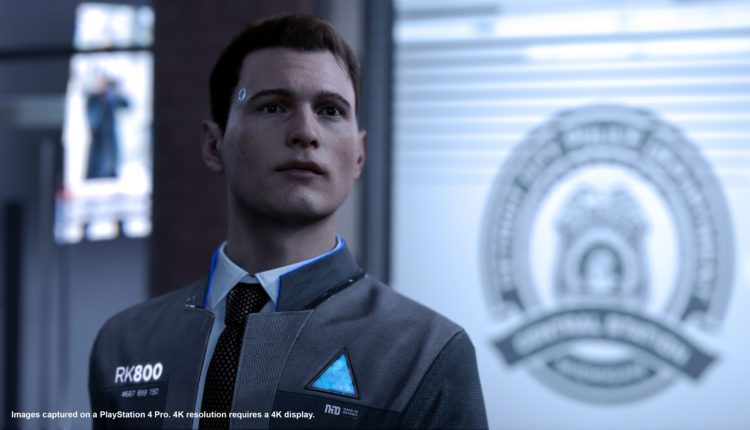 Let me be generic for a minute, because look, I know it’s motion capture, but I need to talk about how beautiful this game is. The skin, the eyes, the movement, the rain, the shadows, all of them are stunningly realised, and I’m only playing on a launch day PS4; I can’t imagine what it’ll look like on a Pro, but it’ll certainly be a sight. 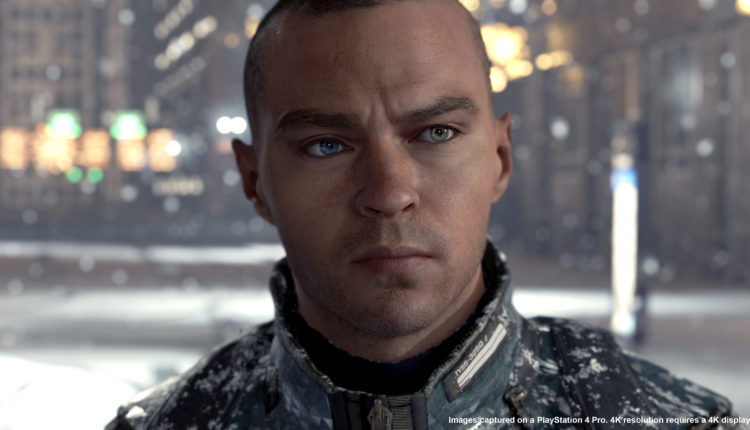 Each character looks fantastic, from the protagonists to the NPCs to the virtual assistant on the main menu. Said assistant Chloe is, by the way, a smart arse, and I’m a little bit in love with her. The second time I booted Detroit up, she told me my save game was corrupted. There was a second of panic before she looked up, straight at me, and grinned. “Just kidding,” she said. This seems like a minor thing, but that little detail turned a main menu screen into an engaging experience, and I can’t remember the last time a game even tried to do that, let alone succeeded.

Plus, she’s pretty cute. I haven’t been sexually attracted to a menu since that time I was asked quietly and politely to leave KFC and never return. 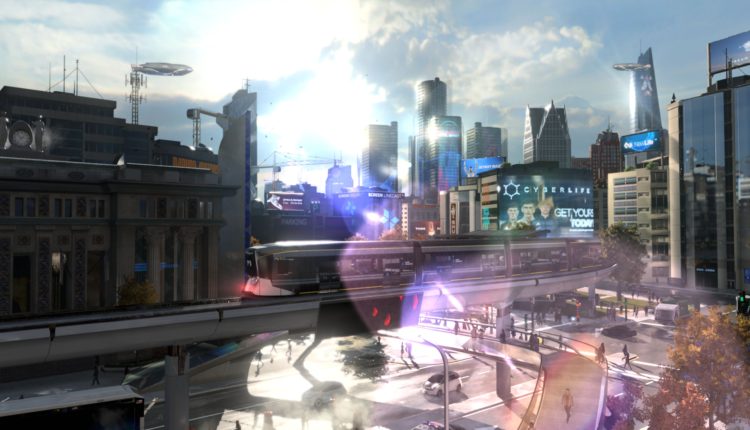 It’s rare that I’ll play, read, or see anything where I’m genuinely invested in all levels of the plot at once, but here we are; the whole thing is great. Sure, I made some missteps along my ideal path, but the stories all concluded in a satisfying way. I didn’t feel as though there was anything left unanswered, even if it wasn’t what I’d hoped.

Thematically, Detroit: Become Human is about what makes us human, and the nature of free will and rebelllion. At my very core, I am all about that junk, and this is the perfect game for that kind of content. You’re living their stories, not just watching, and the investment you feel in these people (and they are people) isn’t simulated, but genuine.

At the end of each sequence, a flowchart displaying your choices, and those not taken, is shown. This isn’t that important, but it’s fun to know where you stand compared to other players, whether it’s saving a fish’s life or saving a child’s. There’s also a neat survey in the Extras section that ascertains how you feel about artificial intelligence and the possibility of android friends. I was not surprised by the results. 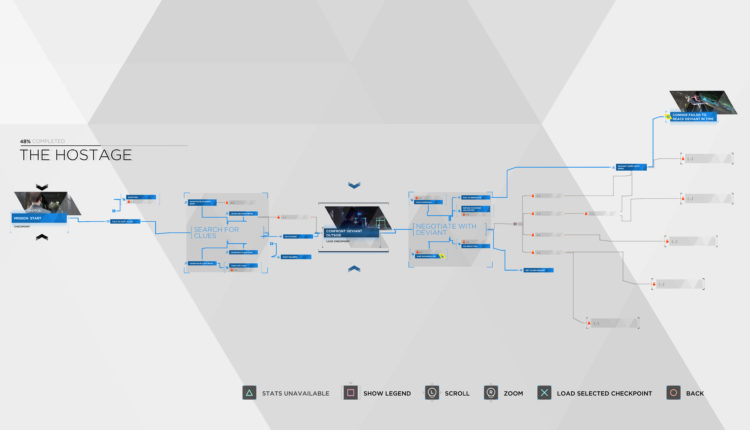 I’ve tried to, but I can’t fault this game. I loved every minute of it. The closest thing to a nitpick I can come up with is that the soundtrack isn’t particularly inspired, and the walking can sometimes drag a bit. Otherwise, it’s a great experience and a truly touching narrative. But, with all that said, I’ve got a question for you, David Cage: how many fingers do you think I have? Because some of these events seem to require at least eight per hand. I mean, if you want to get me extreme cosmetic surgery to add several digits to my hands, I’m up for it. Until then, maybe ease off on the R1+R2+Square+Circle shenanigans, because I use like two fingers for all of those things. 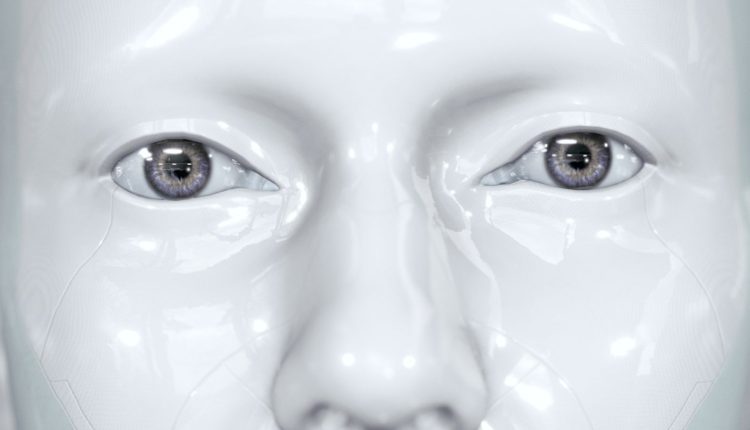 Ultimately, aside from anything else, Detroit: Become Human does exactly what it sets out to do, and does it well. I still don’t know if androids dream of electric sheep, but I’ve dreamed of games like this for a long time. If you like narrative driven games, and that whole choose your own adventure vibe, and have about 30 hours to spare, book a ticket to Detroit.

95% I still don't know if androids dream of electric sheep, but I've dreamed of games like this for a long time.
2018detroit become humanPS4quantic dreamreview
Share FacebookTwitterReddItWhatsAppEmail

Originally from Ireland, Brian moved to Wellington in 2014, and is still pretty sure that it was a good idea. He is convinced that Fallout is the greatest game series of all time, and believes the same about Bioshock, Pokemon, and The Elder Scrolls. This is in no way a contradiction.

He was a staff writer at NZGamer before joining CultureJam as Writer, and later Editor.

NEO: The World Ends With You announced for PS4 and Switch

PS5 has an ad featuring Rick and Morty

Originally from Ireland, Brian moved to Wellington in 2014, and is still pretty sure that it was a good idea. He is convinced that Fallout is the greatest game series of all time, and believes the same about Bioshock, Pokemon, and The Elder Scrolls. This is in no way a contradiction.

He was a staff writer at NZGamer before joining CultureJam as Writer, and later Editor.

Immortals Fenyx Rising Is Out Now

The Apple TV app has launched for some Sony smart TVs

Chronos: Before the Ashes is out now

Xbox Game Pass has a massive month including Control